I received a sample of the KnoWhen Ovulation Predictor from the manufacturers and provided it to a client (who we'll call Staci) for review. She asked to remain anonymous for family members who are very nosy.

Here's Staci's review in her own words:

"I received the KnoWhen package and initially thought 'it's so small and compact, it can't be accurate!' I don't know why, but we tend to consider the bigger and flashier the product is, the more reliable it is. This package was small, it could fit in my purse - and that's where it went. 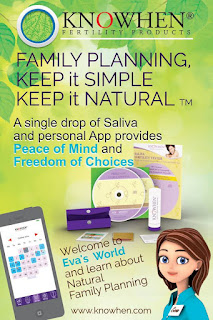 That weekend, my partner and I went to a hotel out of town for a friend's wedding. I was excited to
try the KnoWhen Ovulation predictor and set it up by my bedside the night before. We were actively trying to get pregnant, and this was the perfect weekend - right when I *should* be ovulating, on a romantic weekend, away from the children.

I attempted to download their easy-to-use Fertility Monitor App, but my phone refused. I don't know if it was the hotel's WiFi, their system, or my phone - but I couldn't do it. Oh well, out came the handy notepad I kept in my purse for basal body temperature tracking (NFP).

That night, we made love. We crossed my legs and hoped it took. I fell asleep with visions of little tadpoles in my babybox prancing through my mind.

The next morning I took my temperature, just under my basal temp - that's a good sign.

Then I drew up a good amount of non-bubbly saliva, not too much, and put it in the glass top cup do-hickey for KnoWhen. I got up and got my shower, got ready for the day, and went down for breakfast. When I came back up, my saliva was dry. I put the cap on and looked at my loogie. According to the ferning I saw, I was very fertile... VERY FERTILE! I did a little happy jig, rinsed off my spit, dried the lens, and put it back in my purse.

That night, we did the deed again. The next, again. That following morning - my temp spiked. I hope that meant we caught his boys during my peak fertility, but only time will tell... To be continued...

This was so easy to use that it was rather fun. I think I'm hooked on it. Between mucous, spit, and temperature - I think I'm becoming quite the expert on my omelette shop. I can't wait to see if KnoWhen was a part of my conception story!"